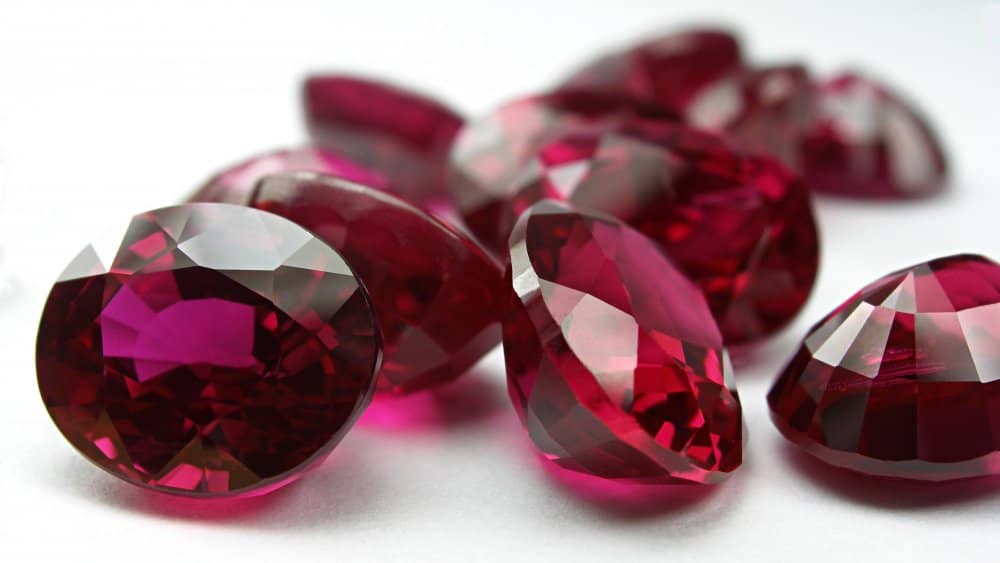 Ruby is the red variety of the mineral corundum, colored by the element chromium. All other colors of gem-quality corundum are called sapphire, which means color is key for this royal stone. The chromium that gives ruby its red color also causes fluorescence, which makes rubies glow like a fire from within. Paradoxically, chromium is also what makes this gem scarce because it can cause cracks and fissures. Few rubies actually grow large enough to crystallize into fine quality gems, and these can bring even higher prices than diamonds.

Rubies have been particularly prized in Asian countries. Records suggest that rubies were traded along China’s North Silk Road as early as 200 B.C. Chinese noblemen adorned their armor with rubies because they believed the gem would grant protection. They also buried rubies beneath building foundations to secure good fortune.Ancient Hindus believed they’d be reborn as emperors if they offered rubies to the god Krishna. In Hindu folklore, the glowing fire within rubies burned so hot that they allegedly boiled water. Greek legends similarly claimed that ruby’s warmth could melt wax.

Many cultures admired ruby as a symbol of love andpassion. Rubies have long been considered the perfect wedding gem. Due to its deep red color, ruby has long been associated with the life force and vitality of blood. It is believed to amplify energy, heighten awareness, promote courage and bring success in wealth, love and battle. Tough and durable, ruby measures 9 on the Mohs scale. Diamond is the only natural gemstone harder than ruby.
Categories:Birthstones, July